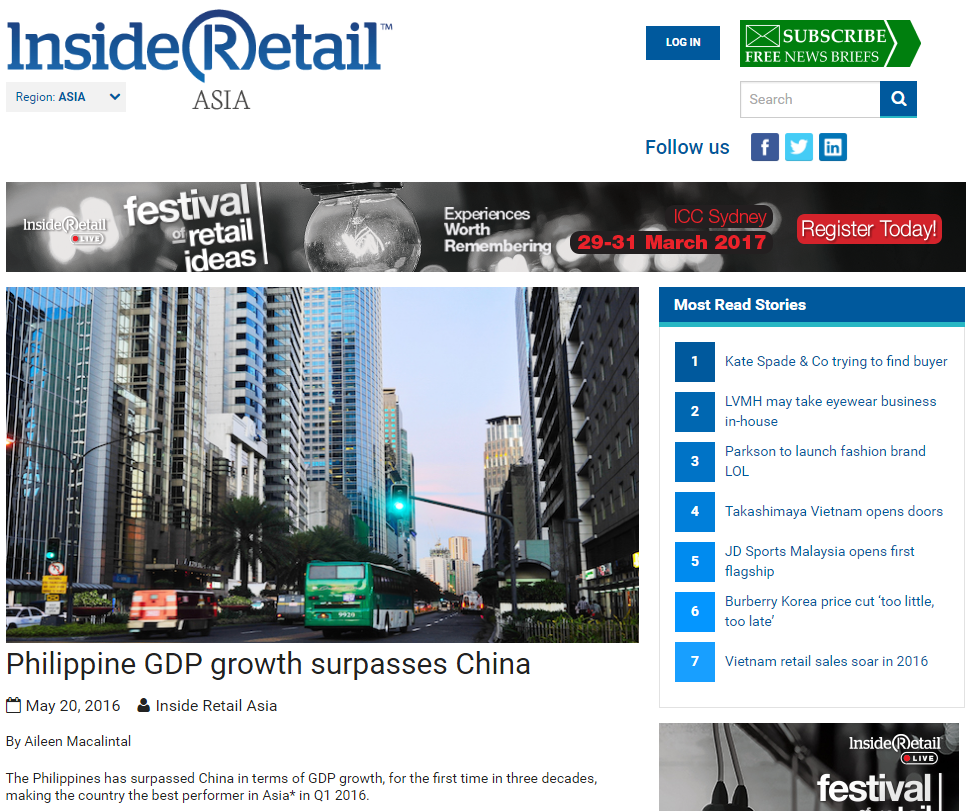 The Philippines has surpassed China in terms of GDP growth, for the first time in three decades, making the country the best performer in Asia* in Q1 2016.

Philippine GDP growth outpaced China’s 6.7 per cent, Vietnam’s 5.5 per cent, Indonesia’s 4.9 per cent, Malaysia’s 4.2 per cent, Thailand’s 3.2 per cent, and Singapore’s 1.8 per cent economic growth in the quarter.

“GDP may have been record high, but we have to account for the increased consumption component due to elections spending. It has been documented that during election periods, consumption increases, and with more created temporary jobs, more income circulates in the market,” said Abueg.

Abueg said credits should not only go to the Aquino administration. “Some underlying components of growth may have been realized today, but the work of previous administrations are just now bearing fruit – the so called ‘lagged effects’ in economics and statistics.

“That is why it is important that we should always have continuity: to continue the good, and to correct the bad. Not just to change everything just for the sake of credit-grabbing, which is a usual problem in Philippine politics, affecting economic directions.”

The PSA said main growth driver was the services sector, which accelerated to 7.9 per cent from 5.5 per cent, while industry grew 8.7 percent from 5.3 per cent last year.

On the other hand, the agriculture sector declined by 4.4 per cent, the fourth consecutive quarterly decline, from a growth of 1 per cent in the first quarter of 2015.