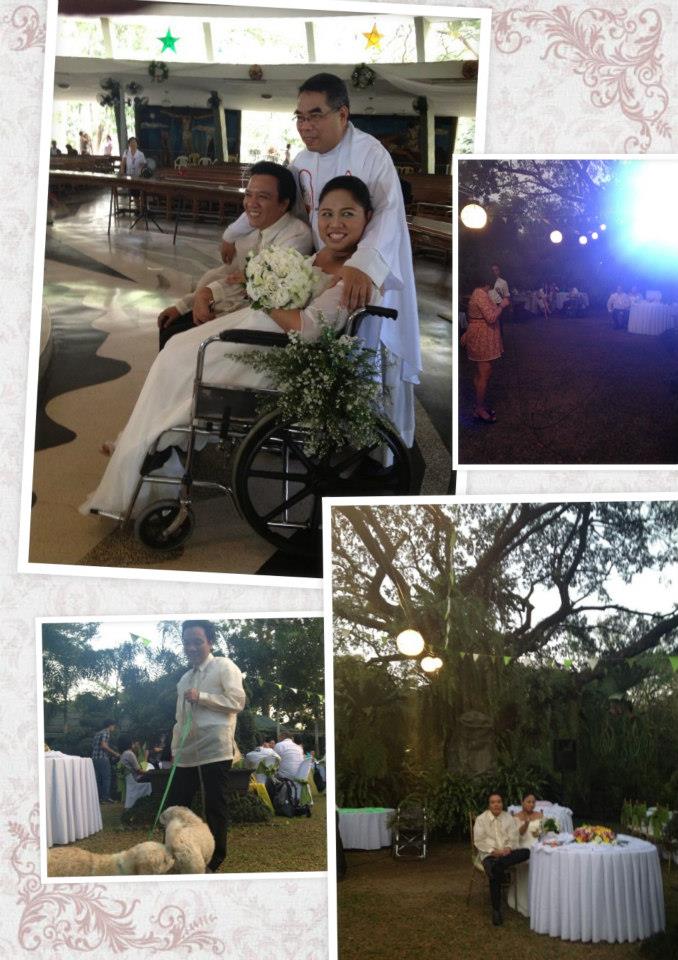 End of the world wedding I attended a special wedding when the world was supposed to end last December 21. An official marriage of Weng and Rene, two people I respect since 2002. (Mike and I worked with them during the fun run for Given, but more on that on the next post).

The complete program was only handed to me while Rene was waiting at the church in UP Diliman. We’ve talked about it already but I noticed a few additional items, like an introduction of the groom and the bride–how you know us, says the note. I thought I’d have time to ponder this but Rene pulled me to help arrange the entourage (groom and parents, primary sponsors… my knowledge of weddings stop here).

I could’ve introduced the couple better than just saying they were my colleagues in UPLB’s student publication way back, but I didn’t want to start the program by being so melodramatic or so formal as if I’m introducing a speaker, so here I blog about them. How do I start introducing this person.

He has a beautiful mind. A vulgar personality. Keen logic. And overflowing self-confidence. When Weng was my editor, Rene would always tell her, “Weng, itong si Ai may crush sa kin.” I would look up from the article I’m drafting or reading and try to understand Rene, wonder why Rene likes to annoy people, or why his well of self-esteem never dries,  or why Weng took Rene as a boyfriend or why the lovable Weng would waste her time on this person-turned-Ego, and then I’d go back to my quiet business of doing my job as a Culture writer.

Later on, I’d understand this guy. Whenever the editors and Rene (he was always in the newspaper office) would pore over articles while smoking, I’d hear them talk about issues and ideas. His articles and unsolicited letters to the editor are always biting and cool, which somehow always makes the other side look stupid. Rene can undermine an “opponent” with pure common sense and with the blow of cold, curt sentences.

Later on, I’d understand this guy. While discussing ideas, he would talk about experiences (Life’s greatest teacher). Perhaps people in the press office respect him because he’s the oldest (haha), the most experienced, the most beaten up by life’s worst jokes. I think he has more enemies than friends when he was in the University due to ideological clashes, but his circle of friends in the campus are the coolest, brightest ones.

Later on, I’d understand this guy. I read his notes and articles on humanity, depression, deaths, activism, social structures. He entered the University as a chemical engineering major but graduated as a sociology student. Some of his writings before could drag any reader into existential blues and melancholia, like watching a Lars von Trier film. He drifted away.

Everything changed one day. He sounded happy and full of hope. He married Weng. Weng is a loud lady.

This bit of information, I slipped in the introduction, and I felt everybody agreed during the reception.

Whenever she enters the [p] office, she has this air of a queen (Madonna is her idol), laughing like she owns the building, cursing every other sentence, commenting on everything, and talking to everyone. I like that last part about her. Whoever you are, you can sit with her for hours while she does the talking about anything. In college, I love listening to her and News editor John Prejillano (RIP) horse around endlessly.

Weng and I were under the same program, Communication Arts. She’s known among her batch (and other batches that time) as the person who stood up against a famous professor because of some sensitive issues. They’re friends now, but her actions changed something in the system.

During the “drift,” I sensed her determination to put things back to where they came from. After thirteen years of on-and-off relationship, her faith in love and other insane abstractions grew stronger, and she emerged the victor. When she was about to roll down the aisle (wheelchair to protect the baby in her womb), she’s fighting back tears and I couldn’t look at her anymore cuz I’m a crybaby, too, so I went to Mike who was taking charge of the march song, Come What May. Weng and Rene have this strong aura when they’re together, especially when they laugh together. One time we were at Cafe Adriatico, I noticed, there’s something mischievous in their laughter as if they hold a couple secret, as if they can read each other’s mind and continue a different telepathic conversation in split-seconds.

But, they are one of the most honest, if not frank, persons I know of. They harbor no pretensions whatsoever, and I respect them for that, above so many reasons.

Now that Weng is about to give birth to their princess, I could imagine how tough their kid will be. It will be interesting how Rene would introduce the world to the planet’s new occupant, and how Weng would shower the kid with Madonna love.