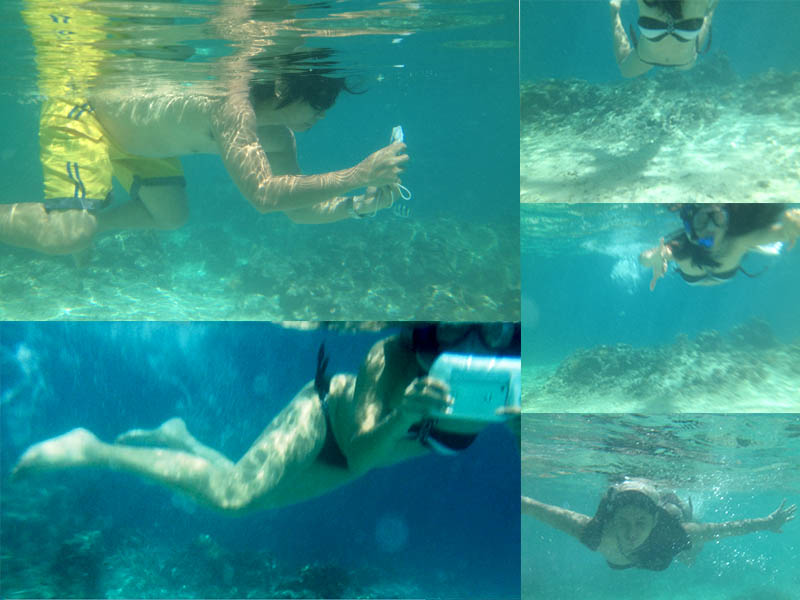 Planning a trip to El Nido

If you wish to visit El Nido for the first time, probably the first step to planning is buying yourself a ticket; everything else follows. Many airlines offer low base fares. Mike and I got ours for only P1300 each (seat sale), all in, round trip. You can check Air Asia, ZestAir and Cebu Pacific, which regularly fly to Puerto Princesa. If you’re quite the high earner, I’m sure you’d be more interested in flying straight to El Nido from Manila through 20-50 seater charter planes for about an hour (12,000-15,000 per head, round trip). Plane tickets checked, you now need to decide how to reach El Nido. The travel hours could be overwhelming: 5 to 9 hours, like land travel from Manila to Ilocos. Truth be told, I initially considered staying in Puerto Princesa instead of spending all those hours on a bus, but we’ve been advised to spend another time for Puerto, and another for El Nido. Leonard, a former office mate and travel junkie who knows his beaches well, said that if I’m to go to Palawan, El Nido must not be missed. His testimonial of the place were enough to push me to google options. The most comfortable ride is that special van transfer (see this 6000-peso ride here). The more affordable vans, nothing special in them, cost 700-800 pesos. If you’re like me who feels claustrophobic in a van, you’d choose the bus. Between ordinary and aircon, I’d go for the one that can block off dirt and smoke — but hey, Palawan is no EDSA, Manila’s hopeless main thoroughfare made of carcinogenic air and noise pollution. However, since Mike and I had to choose the very dates when Typhoon Yolanda barreled across central Philippines, RORO buses were rare if not zero. Our sort-of host owns the chain of stores around Puerto Princesa, one of which was right in the bus terminal, so when she called her contacts there, she informed us that no other buses were back to business except that cheap (P400), ride-at-your-own-risk, roller coaster-ish ordinary bus. Where do I start? After breakfast, Mike and I were picked up by our host and they dropped us at the San Jose Terminal, where they start their round visits of their stores. If you’re commuting from the airport to the terminal, tricycle rent is at least 100 pesos because it’s quite far.

We sat at the far end corner of the bus, surrounded by locals who seem to be on their way home after a stormy night. To my left was a young man, a teenager maybe, in jacket, cap and dark sunglasses; quietly sliding to sleep. In front of me were a family of three, with the kid holding on to the seat rails while the mother clutched her, all three bouncing in the air, swerving with the curves. The ride was smooth and rather fast, maybe too fast at one point when we swayed and lurched forward and leaned on our sides and back and held our breath as we almost fell onto a canal. Twice we paused at a road block because of fallen trees and branches due to a minor land slide. Soil was wet, skies grey, air cool, and scenery humdrum. Three loud women were laughing and talking about the storm that just passed; they missed their stop for more than a kilometer and the whole bus laughed. Ordinary buses aren’t that bad.

First three hours saw empty streets. One, two cars were on the road, coming from the other direction, but most of the time, there were a few men or women by the road, holding an umbrella while surveying what the storm left in its trail. Dogs were everywhere, I started thinking they were the citizens of those towns by the mountains and sea. They were crossing streets, observing people, lying on their tummies, sniffing travellers’ tracks.

At the first stop Mike bought me tall scoops of dirty ice cream topped with a choco biscuit then we shared a pack of Oreos to inject more giddy vibes and calories into our bloodstream. By this time, we transferred to the passenger seat beside the driver, with the road in front of us like a 4D movie. I thanked Mike for everything and whispered him something like ‘I love you, just in case we crash into a ditch or hit another bus on a head-on collision.’

Challenge sat at the final leg of the trip when the bus had to endure rough road.

For the third time, we transferred seats. Somewhere in the middle we bounced and swayed as we continued listening to music from our iPhones. With a global advertising “It’s more fun in the Philippines,” it’s a bit of a concern why the government is taking some time to put its act together in building roads especially the ones that lead to world-famous spots.

It was drizzling when the bus reached the town of El Nido, but we’re not to be bothered watching the rock cliffs welcome us. You have to see them for yourself to understand the supernatural feeling of setting your eyes upon them.

A tricycle took us down to what would be our home by the shore. Tandikan is the name of the beach cottage/rooms, it’s 1000 pesos per night. We roamed the streets after we were served instant coffee and post-storm stories by the owners who couldn’t get over the chill of witnessing strong winds and crashing sea waves that almost reached the houses.

El Nido’s streets are so narrow, we had to be on our guard for passing motorcycles, bicycles, and other vehicles. The farther we went, that is, closer to Art Cafe, the narrower the wet streets became. Local life spills to the streets and European restaurants, mostly French, are seen left and right.

We wanted to do island-hopping that day or meet Mariglo Laririt, environmental director of the posh El Nido Resorts, but the typhoon has wrecked all these plans. Luckily, the next day, the sun finally blessed our dreams and allowed us to have one of the famous island tours (A, B, C). The most famous of the tours is Tour C, 900 per head, sumptuous lunch included.

After snorkeling, swimming, sun-bathing, and picture-taking all morning, we took our rest in one of the white sand islands where we ate grilled chicken, porkchop, crabs, shrimp, steaming rice, and a platter of watermelon and bananas. We brought our own water.

After this, we swam and snorkeled and island hopped more, saw limestone cliffs and seemingly haunted building in one of the islands, and let the wind soothe our tired body as we sailed back for an hour in the setting sun.

All in all, you can prepare for these expenses, per head:

Food: depends on you, there are meals as cheap as 50, and restaurants can charge around 200 pesos per meal

Hope this inspires you to plan your trip now to El Nido, while seat sales are abound. Trust us, experiencing El Nido is not as impossible as you think it is.

Hi Ma’am Ai! Thanks a bunch for the reco.!