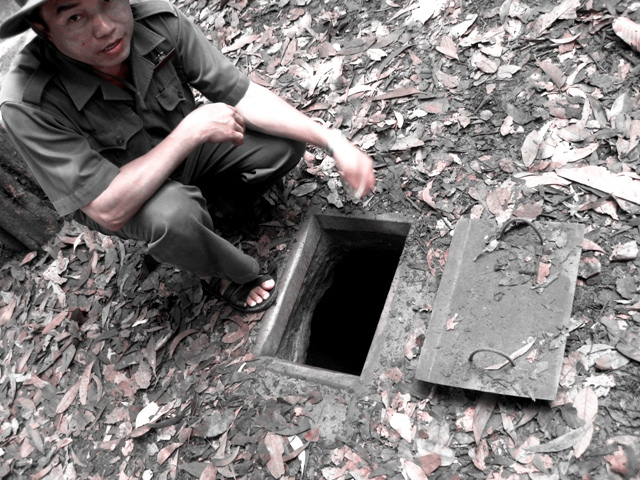 How to scam a scammer in Vietnam

Not all escapades are bathed in sunshine.

Early this year, I planned to divulge some misadventures I encountered in my trips (see: Bangkok post). Here’s an account of how I was scammed in Vietnam and how I turned the tables on the scammer.

After being swathed in comfort at the five-star hotel where I stayed for a week, all expenses paid by the company, I went on my own to roam Saigon’s streets, dodging motorcycles like a pro; ask anyone who’s been there and know how crossing streets can either be a turn-off or a game challenge. Read blogs, too, about Vietnam and you’ll find plenty of scam warnings.

While walking down the boulevard in front of the former seat of power, Reunification Palace (where the North and South united into one country after the war), a man riding his motorcycle approached me with a grin plastered on his brown sun-dried face. He looked like a scammer with that smile, and his approach made me uncomfortable because it’s like what others have blogged about. He was offering a motor ride to the Cu Chi Tunnels, a famous spot outside the capital. I politely refused. Personally, I don’t know how to feel about making a tourist spot out of a complex network of underground tunnels where locals hid from bombing. However, visits to places such as this can feed an appetite for history.

The old man offered a round-trip fee of 150,000 VND (Vietnam dong). I thought it cheap, considering tour companies offer group packages of bus rides from 130,000 to 170,000 VND. But this is the idea of scamming: luring one with sweet promises for cheap prices. I said no. He kept on following me while showing his notebook with taped photographs of caucasian and Asian tourists with an OK thumb sign, smiling with him, trying to make me believe that he’s trustworthy. I said, I’ll just buy me a baguette then I’ll take his offer.

He ordered and paid for my baguette. A kind act, I thought. He also bought me a bottle of water, another kindness.

Since I wanted to see one more museum, he took me to the War Remnants Museum where he waited for about an hour outside. I wore the helmet and off we went circling motorbikes and passing street after street of old buildings. After two hours, we arrived at the tunnels and he paid for the entrance (around 100 VND). He asked me to wait while he called someone to tour me. While groups of tourists were being shepherded by a guide, I was the lone guest who was accompanied by one guide for myself. It felt awkward appearing to look someone special, but what’s more awkward is whenever both men (the guide and the scammer) offered to take my picture at entrance posts, underground tunnel, firing area, diorama of torture scenes, notes and signs posted on trees, and practically every corner of the historical place.

I refused to have my picture taken, except when I asked them to hold my camera as I descended into two tunnels). The questions on their faces didn’t escape me. They may be wondering as they talked in Vietnamese, why this ‘tourist’ doesn’t want her photos taken in a tourist spot. Now that I think about it, I just wanted to ‘witness’ this part of their gloomy history; smiling and posing in a place where so many dreadful, unspeakable events happened, for me, just doesn’t feel right. In fact, I felt doing so would be insensitive to the spirit of the place.

After claustrophobic me survived the Cu Chi tunnel visit, the old man treated me to a lunch of chicken pho, a Vietnamese specialty, at an eatery by the road. I thought this was too much for him especially since he also bought me milk tea on our way to the tunnels earlier that day.

On our way home, he made me experience another local delight, coffee. When you travel outside Ho Chi Minh, you’d find “stops” or eateries where home-grown and made coffee is served to motorcyclists and anyone tired of long drives. Beside the tables are rows and rows, and more rows of hanging hammocks, as if there’s a huge sleeping camp site. Everyone sleeps on the hammock after coffee. Very peaceful way of life, I thought while secretly observing men and women pouring coffee or letting coffee drip from a tin can to their glasses and mugs. The locals were dozing in the early afternoon of brewed dreams. Eternal calm suffused the hamlet of hammocks.

Two hours after a long ride, which paused when the man let me drive his motorcycle in the middle of rice paddies, he took me to a spot near the heart of HCM and called someone to take our picture. I was happy and tired and didn’t smile because I knew he’s going to put it in his notebook and I didn’t like that.

The sun was about to set and instead of dropping me at the center of the city, he dropped me at an alley, back of some buildings, with very few people looking on as if waiting for something to happen. He asked if I want to have soft drinks and something to eat. I refused and confirmed how much I owed him. He said: 1,500,000 (70 USD or 3000 PHP). I said, we agreed at 150,000. He said, no, it was one million five hundred. I said, no, that wasn’t it. He wrote the figure on a piece of paper like I didn’t understand the first time he said it. I said, I’m sorry uncle, I don’t have money to pay that. By that time, my face was totally blank and devoid of emotions, because I didn’t know how to feel about the guy. I appreciate their culture, I empathize with their history, but I do not tolerate any form of dishonesty, deceit, and treachery.

The man said I could withdraw money from my ATM; I told him, I don’t have money in my ATM. He said, we could go back to my hotel for me to get money, I said, I don’t leave money in hotels. He said, I can give him any money, any currency; I said I only have ‘coins’ and very small bills from Singapore and Malaysia, which I showed him, and he said he can accept those. I gave these to him aside from the agreed upon dong (150,000), reminding myself that he paid for my food and entrance fees. He scratched his head, looking forlorn, so I said I’m very sorry, I don’t have money. He shook his head and smiled, murmuring something, perhaps “Not my lucky day today.”

He rode away, still scratching his head. I walked back to my hostel room, not sure if I was scammed or if I scammed the scammer. The lesson is, there are scams, but scams can be reversed, exposed, avoided and hopefully apprehended.

My mind couldn’t process anything anymore that night. It was a long day of  ingesting stories of atrocities such as chemical warfare, babies being born deformed and almost unrecognizable, torn limbs, massacres, hell on earth, villages living kilometers below the ground, bombings, deaths, poverty, and the many lingering effects of war, which I couldnt’ve seen first-hand had I not ridden the old man’s motorcycle.