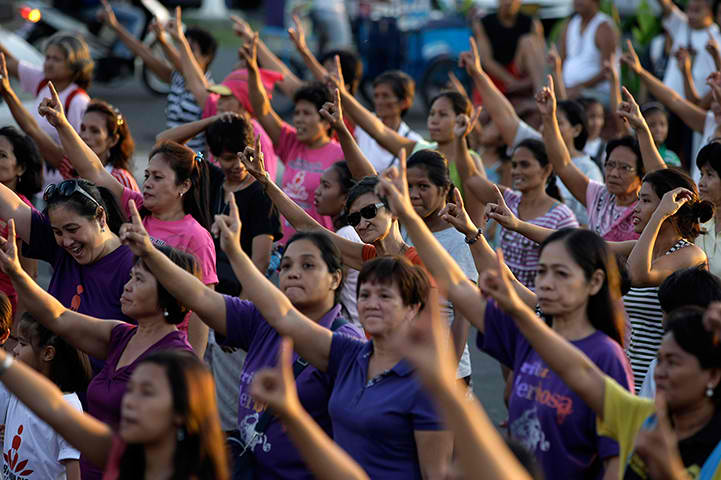 Since the super typhoon made a landfall in the Visayas islands, I’ve been looking for a detailed narrative of what happened at ground zero because reportage on Day 1 was crippled by busted power and satellite signals. Here, thanks to a contact of friend Izah Morales, I found a harrowing account of a person who narrates how it is to be trapped inside the fiercest storm that ever whipped the planet and losing almost everything to the typhoon.

I checked in Mommy, Daddy, and Binang, our household help, at a hotel in Tacloban City near the Tacloban City Astrodome. During that time, it was the most logical place to shelter my parents after experiencing the waist-deep floods in Palo. The building was new and sturdy and the winds coming from Samar would only bombard the side of the building. I felt that the building would survive.

We were happy. We felt safe. My mom and I made sure everything they would need for the next two or three days were sufficient. We had snacks, we watched TV, I taught my mom how to use Facebook so she could while away the time looking at pictures and chatting with friends and family. When I went home around 2PM to check on our house, Mommy also sent me to get her blanket and extra pillow because Daddy took all of theirs. He loved being wrapped in bed sheets and blankets until only his face was exposed.

Around 3PM, I went back to the hotel, and checked on them again. Daddy and Binang were happy watching TV while Mommy was busy figuring out how to see the pictures of our friends. I left around 5PM and told them I’ll be picking them up tomorrow. Mommy even went out of their room to see me off.

Time flew so fast, my friend Luisito and his family, his wife Kim, 2-month old baby Adam and 4-year old boy Luis was staying with us that night. The winds were eerily calm and we were waiting. I didn’t know what time my brother, Marlo, in Australia called but I kept telling him to call Mommy.

We were already planning Mommy and Daddy’s migration to Australia and when will they return to the Philippines for vacation.

My girlfriend Daisy and I prepared coffee since we really couldn’t sleep. Checking on Luisito, who was already awake, he said that all is well.

Yolanda struck us around 5AM, our house was swaying. Power was already cut off. Luisito and I were checking on the houses around us. The winds were not strong yet, but when one of the concrete walls of our neighbor gave way and exposed the innards of their house, we started to be scared.The winds were starting to howl like wounded dogs, I feared for Luisito and his family who were staying in our two-floor mini hut beside our house. We were shouting at each other on how they will come down. I opened our two doors at the back so they could run inside our house. The winds were strong I had to anchor my feet on a wall while keeping the doors open. Luisito came running down with Luis. Then went back to fetch Adam. Kim came after.

A few seconds after, our mini hut was blown away.

The wind was brutal, we had zero visibility, we couldn’t hear each other because of all the howling so were shouting. I saw a little light by the kitchen, and wondered why and realized that the roof of the left side of our house gave way. I heard a loud crash outside, then looked outside. Our ancestral house just lost its balcony. Then half of the house gave way. I was shouting at the window asking if there were still people there. All I could hear was howling, twisting aluminum, crashing roofs, breaking wood.

Finally, the roof of our kitchen flew. We moved towards the left side of our house where there was still roof, then it suddenly got peeled away. Dull white light filled the house. We moved little by little holding on to the shaking walls until we reached the left extension of our house. My cat Smirnoff was going crazy. Our dog Bingo was shivering in a corner.

Our extension was our last and final fort.

Everything was white outside the house. The winds were getting stronger and stronger. We were like looking out of a plane’s open window. It also felt like it.

Staying at our fort, Daisy and I were holding our bookshelf which was covering a hole in the wall, while Luisito was holding the door of our extension from blowing away. Kim was holding on to their children.

The ground was shaking and the winds were deafening. We closed our eyes and prayed.

The winds weakened a little. I told everybody that the eye of the storm is probably above us. We looked outside and saw some people coming out of the debris. We shouted at them that they shouldn’t go out yet. Luisito told me, if the extension’s roof won’t hold that we have to hide inside my car that was amazingly still parked beside our house and what remained of our mini hut. I didn’t have my car keys.

We opened the door of the extension and ran to our exposed rooms to try and look for my keys, but I panicked and couldn’t find it and just cried. We ran back to the extension.

This was our last chance. The winds came back stronger than ever. All of our divisions crashed down, everything was flying around, I said to myself, this was the end.

All of us were holding on and praying that the roof of the extension won’t give way. Then Luisito and I decided to pull out everything from the bookshelf and use the huge thing as a cover. We unloaded all the contents of the shelf and put it over a table and a sofa we pulled to the side. We had Kim and her two sons and Daisy go under and sit in the already flooding extension. Luisito and I stood over the bookshelf and held onto it to try to keep it in place. We were holding each other’s hands.

The surroundings were bright. The sky was white like a veil. We saw people coming out to the streets. We went out as well.

Destruction. Nothing was left standing in Palo. Looking left and right, everything was scattered. Lamp posts, electrical posts, everything was destroyed. I walked around, and no house was recognizable. Junk everywhere. But we were alive.

We reassured each other that everything will be okay, that being alive was enough.

Then at 11AM, the winds were starting once again, people were running back to where they came from. We were all afraid. But Yolanda has done enough, and by 12NN, the sky cleared.

I prayed that Mommy and Daddy were safe somewhere.

Luisito and I went inside. Jagged aluminum roofing was all around, parts of other houses were inside our house. Everything inside was wet, all the shelves and cabinets were torn out of the walls, everything was scattered.

I just cried while removing wood and metal and trying to see what could still be salvaged from the debris.

At around 5PM, people on motorcycles were shouting that a tsunami was coming, ten-foot waters were rushing to Palo from the outer towns. We dropped everything and ran to our neighbor’s Morales’ three-story concrete house which was still standing.

It was starting to get dark, and Mana Lucy Morales was herding the people upstairs. Where we were was a different place. I saw different people from everywhere rushing upstairs. Hundreds of us were on the second floor while another hundred were in the third floor roofdeck. We decided to go up still. We were checking the town from the roofdeck and all we could see was destruction and people rushing to higher ground. We could see people climbing Guinhangdan hill which was now bare of trees. There weren’t trees anymore but broken branches and naked trunks.

People were all chanting in prayers now, and hoping that everyone else would be safe. There was nothing, we didn’t know how anyone was doing. There was no electricity, water, communication.

We were all alone, and it even scared me more.

After the tsunami scare the night before (it never came), the morning after wasn’t better. We went back to what remains of the house but Daisy and I slept intermittently in the car. When the first break of light hit me, I woke her and said that we have to go to Tacloban. I needed to know where Mommy and Daddy and Binang were. Luisito was already awake so we cleared away debris along the driveway so my car may pass.

Without breakfast, we just brought a bottle each of water and drove off. The road to Tacloban was shocking. Everything was destroyed. Government offices, buildings, convention centers, nothing was spared.

When we reached NIA, bordering Tacloban City and Palo, the flooding was so bad, I had no choice but to park my car and leave it at the side. Daisy and I had to walk all the way to where we were going.

Every time they answer, my heart ached.

When we reached the Tacloban Coca-cola plant which was all shattered glass and bottles, the looting and ransacking was already starting at a nearby apparel store. By the time we passed Agus Restaurant in Real Street which was along Kankabatok Bay, I saw the dead lined up at the sidewalk. With each step, my heart croaked. My tears flowed, and deep in my heart, I hoped for the best but knew the worst was yet to come.

I told Daisy I had to go ahead of her to the hotel. Then I ran.

I can’t go on and describe the next scenes. But I just want my remaining family and relatives in Manila and the rest of the world, that I am alive. We are trying to cope with all the destruction and pain this has caused. The survivors here in Palo, and the rest of Leyte are trying to live a day-to-day existence.

There wasn’t a time that I did not think to just leave Eastern Visayas behind—start over in Manila or somewhere else. There is nothing left here, it’s really hard if you see death and pain and suffering and hunger all around.

But the reason I came back to Eastern Visayas will be the same reason I have to stay. My Mommy and Daddy are here. This is my home. And I’ll try to help my home in any way I can.

All of you may have heard or seen it in the news but living it is different. But we, people of Eastern Visayas are strong. We will try our best to live. And try to recover.

I will not leave Eastern Visayas yet.

Mommy, Daddy, I’m sorry I couldn’t save you. Every minute I wish that this were all a dream. The least Daisy and I can do is to walk for hours to visit you, checking on you if you’re still okay there. I hope that wherever both of you are, that you will watch over us. Watch over me. And give me strength to go on.

To the family of Binang, I mourn with you. She was like a sister to us.

Marlo, my brother, be strong for the both of us. We have to, for Mommy and Daddy.

To my friends and relatives, please pray for Mommy and Daddy. They need your prayers so they can reach their destination peacefully.

But you will never break my spirit.