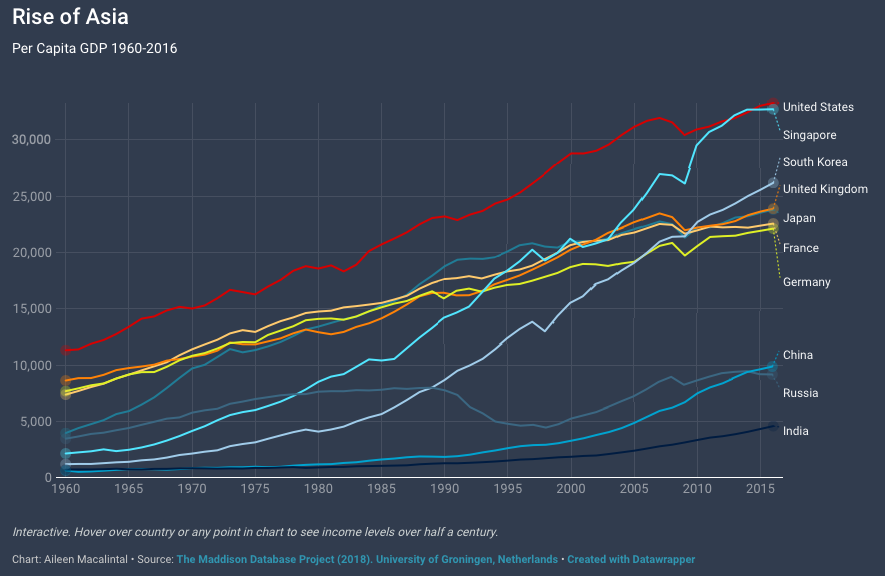 By 2025 global political power will shift towards the east. As of 2018, super power China and other major powers have the strongest influence in Asia.

In seven years, the world’s most powerful states will be in Asia. If you want to see where the center of global political economy is heading, look east.

China and the U.S. fall under “super powers” — a category for a country scoring 70 points or more in the Institute’s study. “Major powers” are between 40 and 69 points. Japan and India were categorized as major powers, while Russia, Australia, South Korea, Singapore and Malaysia join eight others under “middle powers” which have 10-39 points.

While the US remains the “pre-eminent power” in the Asia-Pacific region, other Asian countries are not too far behind, Lowy’s data show.  Japan and India have been emerging as cultural powerhouses in Asia, while China is “rapidly closing in” on the U.S.

Asia’s economic transformation is reshaping global distribution of power. But China is ahead of Asian countries, even the U.S., in future trends, diplomatic influence and economic resilience.

Using data from the International Monetary Fund, the U.S. Department of State and the UN, Lowy ranked China as the No.1 country for future trends in terms of economic size, military expenditure and working-age population by 2030.

China is also ahead of the diplomatic influence game. This is based on the number of embassies, high commissions and permanent missions globally, including diplomatic service and foreign policy. The category also took into account the country’s voting share in major multilateral development banks, membership in diplomatic clubs and intergovernmental organisations. And if political leaders in that country are good at advancing their country’s diplomatic interests in Asia, that is also a plus.

Finally, the Asian super power takes the highest rank in economic relationships. This is measured by total value of trade with index countries, foreign direct investment in the said countries, and bilateral and multilateral free trade agreements worldwide.

Pascal Abb, senior researcher at the Austrian Study Centre for Peace and Conflict Resolution, wrote in Asia Dialogue: “the [Belt and Road Initiative] has further stoked Chinese ambitions to demonstrate how its own rise can transform other societies for the better. This has imbued related projects with a symbolic value that exceeds their pure economic utility and will make it even more imperative to show their positive impact.”

China is also strong in the areas of cultural influence, military capability, resilience and economic resources, coming second to the U.S. In the power index, China was not on the top five in terms of defense networks but its defense spending, armed forces, weapons and platforms pushed its score up in the military capability area.

Abb said in an email: “I think peacebuilding is an area which China is slipping into mainly as a result of previous choices in other fields such as expansion of peacekeeping, investments in high-risk areas, internal rebalancing of development that shifted the focus to Central Asia.”

Abb said that there are, of course, concerns over Chinese economic penetration and long-term dependency as China conducts deeper engagement with other countries. But since China has been dealing with countries mostly outside of the Asia Pacific region (where geopolitical disputes with China are present), said Abb, the engagements do not overlap with China’s territorial claims and will not undermine its credibility there.

As a member of the Regional Powers Network that studies the effects of ongoing power shifts in different world regions, Abb supported the thought that China can be a peace-oriented actor.

He said that China’s engagements can be “assuaging fears about China’s rise, which has gotten more challenging as the South China Sea disputes have heated up. But conflict parties in (for example) African countries will first and foremost care about the impact of China on their own societies before considering its behavior towards neighbors in Southeast Asia.”

Next to the U.S. and China, Asia’s major powers with the strongest cultural influence in the Asia-Pacific region are India, Japan and South Korea, based on indicators that are not usually covered in measuring power:

As the power shifts to Asia, scholars and research organisations look into the many dimensions of the change in global order.

Luisito Abueg, fellow at the University of the Philippines’ Department of Economics, said: “There has been a debate on what will happen if China overtakes the US as the biggest economy of the world, since the latter is under communism, while the former is a democratic country.”

“On another note, there is also a rise in populism–both in market-driven and command-driven economies and states–that may also explain the shift in centers of political power globally,” he added.

And to open more debates, PwC asked: Do we prefer US or China?

This is part of a portfolio for Data Journalism class at City, University of London. Here is another article.