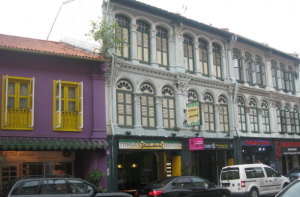 All started when I planned to see

Getting lost, like I said, is not a bad thing, at least to me, who has an uncanny record of running away from home (since 3 years old) and going to places I’ve never heard of. In the presence of strangers, I am most comfortable, but I have to admit, fear would always creep in, touching me with its cold hands, emptying my chest as if I’m on a rollercoaster dive.

The last time I got lost here in Singapore, I discovered some things for myself. First is the narrow alley of corporate offices housed in rundown, wood-framed two/three-storey apartment jammed side by side, set against the urban jungle in Tanjong Pagar, one of the business districts (like Makati) in SG. One of these offices I found in the Internet and planned to see was Ink, an international media company that publishes in-flight magazines for several airlines in Australia, Singapore, Thailand and so much more, including the Philippines’s Cebu Pacific. The door of their office stands inconspicuously on the wall of 89 Neil Road on Outram Park, and nobody would notice it unless they look at it very well, because the building itself looks abandoned: it’s quiet and deserted, save for a few passers-by. I pried open the door after buzzing in and found myself on a tiny vacant room with an elevator on the other side. There was a magazine stand, and nothing else that I remember. No sofa, no receptionist, no security personnel. It was quieter inside. It reminded me of that scene in MIB (Men In Black) when J entered a weird building with a weird lobby, and true enough when I went up to the third floor, just like in MIB, the elevator door at my back opened to Ink’s office. When I went out of the office, I immediately gulped in fresh air. 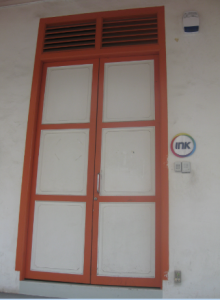 Funny story before I reached their office is that I went round and round Outram Park for almost an hour. I reached the China Town, observed with great interest the merchants and the merchandise, saw their temples and altars, asked for directions, then I went straight to a long narrow strip of pathwalk covered with trees, at the back of Italian-looking houses. Then I stopped over a bridge and hailed a cab because my legs were shaking. Round and round the cab went, looking for 89 Neil Road until we come full circle and found out that I was standing just beside 89 Neil Road when he picked me up. I paid 5 dollars for my lack of direction.

When it was time to look for the bus stop that will bring me to the Singapore Art Museum, I walked for almost an hour, circling the area, till I found the right stop. It was one of the warmest days in Singapore so when I found a seat on the bus, I felt like I was the happiest person in the world to sit on an airconditioned bus. Naturally, I didn’t see the right bus stop where I should get off.

That’s when I saw curious things. 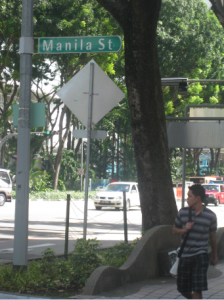 Manila St. and a Filipino, to match. 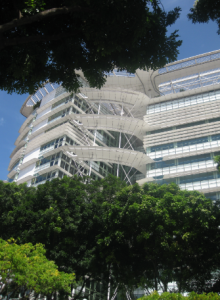 Some honest stores. (I remember, Orchard Road, where high-end fashion boutiques proudly sit next to each other, is also dotted with sex toy stores. The photo above is in Bugis). I reached my destination with 5 dollars left because I spent my $10 replenishing my tap card (the electronic transportation card you “tap” in MRT and bus). But instead of riding the train, my attention was caught by the sign boards leading to Singapore Management University. I followed the signs and found myself walking in their campus, underground. The hallways connected to the subway were lined with college students sitting on the floor or benches or “tambayan” (student organizations’ station) reading or chatting. Bulletin boards call for auditions, orientations, classes, and other announcements. I missed college. I passed by their bookstore (still underground) and stopped by a book sale.

I submitted to my hunger when I saw their cafeteria. There’s a variety of choice: Chinese, Thai, Malay, and Western. I went for the Western because it has yumpastayum. I ordered Aglio Olio lovelovelove. But when it was served, I was a little surprised because it looked like, uh, pancit canton. My first taste told me I should’ve ordered good ole’ spaghetti. It was so spicy! incredibly hot! And so I removed them pepper and sprinkled my aglio olio lovelovelove with salt and cheese like crazy. Then it was love.

I walked some more, and took a bus to far, far away where I felt the gnawing fear. The night was fastly approaching, I had no load to call anyone or money more than $2 to take the taxi back to our flat. I didn’t know where the bus was heading, and the Singapore that I knew slipped by like a dream till we reached a super highway with dark silhouette of trees, no buildings nor houses in sight. I felt alone in the universe that time.

I thought about the pasta at SMU, the flavourful Wild Berries Smoothies of McDo near Bras Basah, and the cute stores I saw in Iluma. Still, I was scared.

When the bus reached the end of the highway, I was relieved, especially when I saw the first MRT station! All the trains in Singapore are connected: Purple to Red to Yellow to Green. They have a pretty clear map of the railroad system and one has to be really stupid if one doesn’t get the maps.

I met with my boyfriend’s friends. They treated me at Wendys (happy experience!) two MRT stations away, and took me to the bus terminal at 11pm, just before the last bus leaves.

Round and round the bus went in Punggol Road and I was again clueless where I should get off. The final stop was a bus terminal, also the LRT terminal. Like I said, nobody can get lost with their trains so I took the last LRT just before midnight and walked to our flat a quarter past 12.